A great beach and dinosaur footprints on the Isle of Wight

Compton Bay is to be found on the southwest coast of the Isle of Wight. It has a white chalk cliff and part of its edge is formed from the soft red and orange cretaceous rocks of Brook Bay, which are rapidly eroding.

At the top of the cliffs, the Island's county flower, the pyramidal orchid, can be found, while the rare Glanville fritillary butterfly also lives in large numbers supported by the native flowers.

Wave and kite surfers can be seen when the prevailing south-westerly wind is blowing onshore. The beach consists of sand.

There are dinosaur footprints visible in Compton Bay when the tide is low, and this is one of the best areas to see evidence of dinosaurs on the Isle of Wight.

It's a site of stunning natural beauty with a south facing beach and dinosaur footprints that can be seen when the tide is low.

For your Sat Nav:

Yes. The car park and its public facilities are owned by the National Trust, as is the coastal strip of land so you will have to pay for parking unless you are a member. Join here. 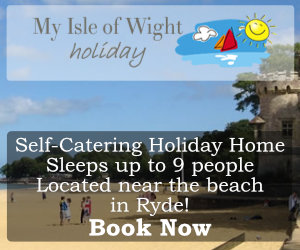